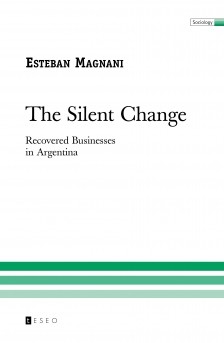 In 2001, the consequences of almost three decades of neoliberalismo made Argentina collapse. Out of the ashes of the ensuing social convulsion arose many different attempts by people to take the future into their own hands. Among them were the workers who started to put bankrupt, abandoned factories to work again in spite of the skepticism of politicians and part of society. Their successful stories surprised those who had expected them to fail and encouraged others to follow their example. In 2003, Esteban Magnani worked for Avi Lewis and Naomi Klein on a documentary on the phenomenon called The Take and wrote a book on recovered factories which is now being reprinted with an update for English speakers.

Esteban Magnani was born in Buenos Aires, in 1973. He has a degree in Sciences of Communication, University of Buenos Aires, where he lectures on Contemporary Thought. He has a MA in Media & Communication (London University). He has written El cambio silencioso on Argentinian recovered factories, which has been translated to Swedish, and has also written many other articles for Canada and Italy on the same subject. He is also the author of several books on history of sciences (10 teorías que conmovieron al mundo, Historia de los Terremotos, Historia de la Comunicación, etc.), some of them published in other countries. He is currently a member of The Working World/La Base, a foundation devoted to provide credit to cooperatives.